Bible Black, a masterpiece from Milky Animation Label. It premiered back in 2001 and aired its final episode in 2003. It has six explosive and amazing episodes. If you haven’t watched this one, what are you doing?

Bible Black is about this school where a club that plays with magic was built. It was all fun and games until it became a power play within the club and murders started to happen. The evil that was made from that club was locked away in the basement of the school for years. In the modern-day, the protagonist named Taki Minase, was wandering around the school and was basically snooping around. He stumbled upon the ‘Black Bible.’ He checked it out and found out that the magic of the book can take over the bodies of his classmates.

The power took over him big time. And his transgressions didn’t go unnoticed by the class. He had so many victims fall to his prey, that even his best friend, Kurumi Imari was one of them. He realized that this power is much larger than him and that he had to reverse it ASAP or else he knows darkness will take over. Will he be able to save himself? Or will he fall into the blackhole of dark magic that will give him all the lust he could ever imagine? 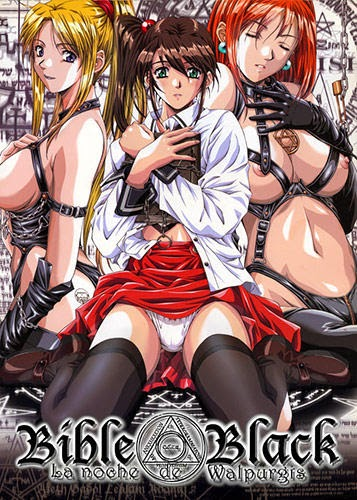 Animation wise, this has to be one of the good ones from the early 2000s. The production studio did a great job, even with the sound effects and soundtrack of the whole series was on point. Basically, we are saying that the plot will have you wanting more but aesthetic wise it will also please your eyes. Animation Director and Character Design Head was Yoshiten and the Scriptwriter was Mutuo, Yasuyuki. You know they really worked hard on this series because of how good it is. Animation wise, and story wise. We can’t get enough!

This show takes sex to a whole new level. Warning though that it has violence and rape themes, so if you are not into that then you can skip this. But if you can stomach it, watch this. Yes, it can be racy – with satanic views. But we guess since it was done so wonderfully, it got really interesting.

Watch all episodes for free here: